Join my newsletter and receive the first three chapters of Provenance!

As I said yesterday, MAC2 had a thing where you could sponsor a “mini park” and a park bench. The dealers room and the exhibit hall and whatnot were all in a huge open space in the convention center, and there had to be some way to close off the dealers room at night, so they put up the Swanwick River and…a volcano? Yes, a volcano, to cordon that area off. There were benches and little “parks” alongside the river.

I figured it might be fun to sponsor a park. And it turned out, I was absolutely right, it was tremendous fun! Here are some pictures!

That’s how it started out, anyway. I’d had a vague idea that pens and post-its might come in handy in case people wanted to make or leave notes–to me, to other visitors, to themselves, whatever. And the post-its kind of took on a life of their own:

Even the No Fishing sign got into the act!

I put out some buttons, including these: 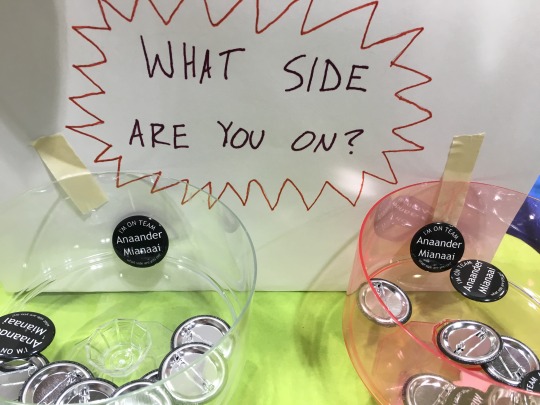 I also played some Cards Against Significant Species: (picture by darling-child-tisarwat, I think, or at least on their phone)

I’m told that at some point I’ll have a link to the file that will let folks print out their own hardcopy of the CASS deck, by the way, and when I do I’ll definitely blog it. So the park was basically a smashing success! I got to take the bench home, and it’s in pieces in my car trunk right now, though I also have the plaque which I might well hang on my office wall (next to the File 770 “Ancillary Bench” plaque, which was kindly given to me on Sunday!).

Thank you to everyone who stopped by–it would not have been even a small fraction of the fun that it was without you all.

No scheduled appearances at this time.

Ann Leckie is the author of the Hugo, Nebula, and Arthur C. Clarke Award winning novel Ancillary Justice. She has also published short stories in Subterranean Magazine, Strange Horizons, and Realms of Fantasy. Her story “Hesperia and Glory” was reprinted in Science Fiction: The Best of the Year, 2007 Edition edited by Rich Horton.

Ann has worked as a waitress, a receptionist, a rodman on a land-surveying crew, and a recording engineer. She lives in St. Louis, Missouri.

We use cookies on this site. For more on our cookies and changing your settings CLICK HERE. If you do not consent to us sending you cookies, then your browsing functions may be limited on our site. Ok